Dakshineswar Kali Temple is located on the eastern banks of the river Ganga right outside of the provincial capital of Kolkata within the state of West Bengal India.[1]

Dakshineswar was once only a small village, but the construction of the Temple marked it’s significance as part of the sacred geography of India. The Land around the Temple was once very lush, but now development has drastically reduced the natural settings.

Historically, the sacred history of the Temple began when the wealthy widow Rani Rashmoni, a well-loved and benevolent community member, prepared to leave on a pilgrimage to the holy city of Kashi (Varanasi) in 1847. Upon leaving for her pilgrimage,

It is also recorded in official documents from 1860 that Rani had additional reasons for constructing Kali’s temple at Dakshineswar, the documents indicate that that the temple was built for the spiritual welfare of her deceased husband. [2]

Once constructed, the temple was largely sanctified by the mystical life of Sri Ramakrishna. Sri Ramakrishna was a native to Bengal and became the head officiate of the temple in 1855. Numerous miraculous incidents occurred in the thirty years that he stayed in Dakshineswar. Together Ramakrishna and Rani Rashmoni expanded the temple’s access to people of all backgrounds including any caste, making the temple’s beautiful settings enjoyable for all.

Architecturally the temple settings are built in the beautiful nine spired, three storied Navarata style. In addition to the main temple complex, twelve identical Shiva temples face east on either side of the ghat that lowers down to the Ganges. Overall the temple is said to have a peaceful ambiance, and a felt sacredness. Dakshineswar is unique in that it has no resident Brahmin Priests managing the site, but some do come in to officiate rituals. Today the Temple is maintained and funded by the Temple Trust. [3]

There are a diversity of reasons for visiting Dakshineswar Kali Temple, but most people come for select religious reasons. Before conducting any Puja (worship) at the Temple complex for Darshan with Kali it is not uncommon for devotees to ritualistically  cleanse themselves in the Ganges river. After performing this, many visit for Darshan-being seen by the Goddess Kali, and to offer her flowers and sweets.

Others come to meditate, and make circumambulation’s around around consecrated parts of the Temple complex. For example, the Bel tree and the panchavati are to this day regarded as shrines in of themselves, because of the mystical practices Sri Ramakrishna performed there. Many pilgrims as they walk around these sacred areas will chant “Jai ma Kali” (Victorious mother Kali) or simply “Kali ma” (mother Kali). In this way they affirm that their attention is focused on honoring Kali and nothing else. Although it is important to keep in mind that Sri Ramakrishna is also worshiped as a holy figure. [4] 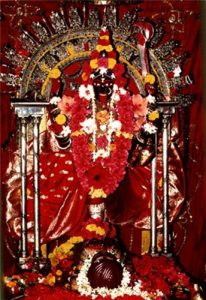 Goddess Kali, adorned with flowers inside the Temple complex at Dakshineswar

Ramakrishna’s divine playground. This pays respect to the thirty years of his life he spent consecrating the place as mother Kali’s home and experiencing mystical insight. People are drawn to Dakshineswar for many reasons, but perhaps what is most alluring is the felt security of mother Kali’s home. Dakshineswar is a space away from the mundane stress of the world, and also a place where the community of Kolkata gathers and finds common ground, pride in its history, and heritage. [5]

Feel free to enjoy a digital pilgrimage to Dakshineswar!